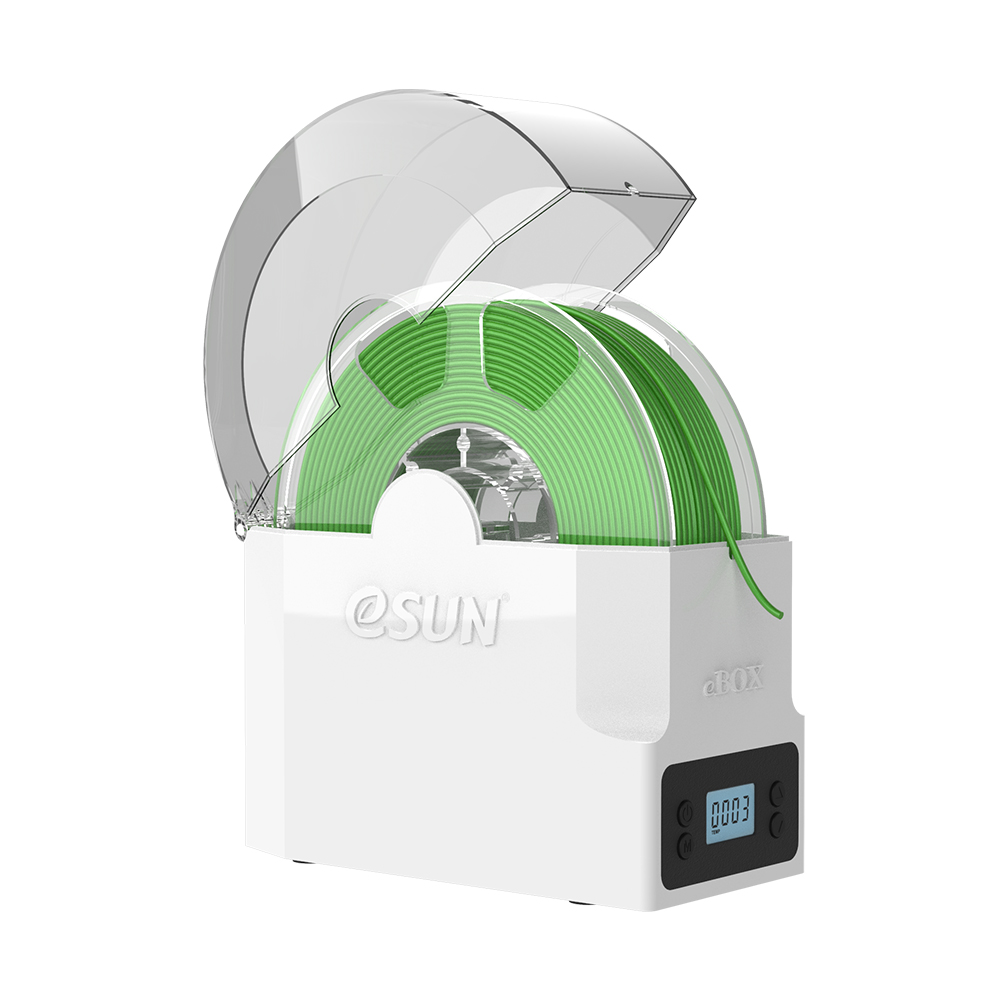 The transparent PC material upper cover allows real-time observation of consumables usage; the arc-shaped heating sheet and the heat conduction metal plate produce more uniform heat, making it easier to maintain constant temperature and humidity in the box; flame retardant and heat insulation foam are placed on both sides of the interior, which is safe and anti-scald, it also helps heat preservation.

It equips a long-life and low-noise turbo fan, which has good performance and low noise. It has wide compatibility and can be used with various consumables.

Compared with the old eBOX, eBOX Lite removes the weighing function and improves the cost performance;

The eBOX Lite is a cost-effective storage box with constant temperature and humidity, moisture-proof and dust-proof and heating function specially developed by eSUN for 3D printing filaments.

the upper cover is made of transparent material, which helps to observe the remaining of filaments in real time;

heat insulation and flame retardant insulation cotton are placed on both sides of the interior, which are safe and anti-scald, and also have the function of heat preservation;

the fan adopts a long-life and low-noise turbo fan, which has good effect and low noise;

The eBOX Lite material box is a cost-effective storage box with constant temperature and humidity, moisture-proof and dust-proof with heating function specially developed by eSUN for 3D printing filaments. It optimizes the problem of insufficient temperature, uneven temperature, inaccurate weighing, and abnormal noise of box fans.

With the popularization of 3D printing technology, the usage of 3D printing filaments has also increased sharply. Among them, FDM has gradually become the mainstream. The filaments used in FDM fusion 3D printing are mostly reel-shaped, which all have certain water absorption, including but not limited to PLA, ABS, PETG, PVA, ePA, ePA-CF, ePA-GF, PC, TPU-95A, etc. Moisture absorption will not only reduce the molecular weight but also makes filaments brittle. A series of bubbles appear on the surface of the prints, and the printed model will be stringing, rough and whitish. By heating and adding a fan to circulate and evaporating the humidity, the filaments are kept in a dry state during printing and printing quality is also improved.

For inquiries about our products or pricelist, please leave your email to us and we will be in touch within 24 hours.
INQUIRY NOW
x